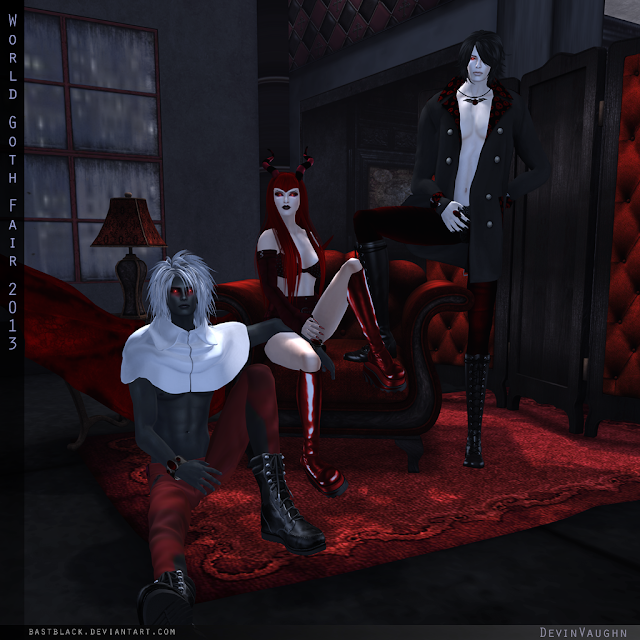 (click to enlarge)
STORYLINE: The Scarlet Rebellion rescued Little Black Hood from the Deathheads who were busy incinerating everything in the cave. She was brought before the Rebellion leaders.  "I am Scarlet, this is Wrath, and Maximilian. We are delighted you have come to us. You are our hope, our messenge in a bottle. Please understand we are desperate people. We are not so different from you. We are your sisters, brothers, wives, husbands, daughters and sons. This place is not a paradise, it is a prison. We have done nothing to deserve this punishment. The mushroom you consumed was watered with powerful blood of our noble elder Maximilian. Wrath dropped it in the human world while on a scouting mission. We are the reason you are here. You are now both Human and Dark. Unlike everyone else, you may freely enter and exit Cursed at will. We will safely take you to the gates of Cursed. We ask for your forgiveness, and please tell the human world about us who are the lost and forgotten."

On the left, I am wearing a cool shortie cape. I love the collar on this. If you want it on sale at the Collabor88 price, run get it fast! Comes in several colors. The pants by Fruk are also on sale. Normally they are 350L but you can get the red and blue ones for 70L, and the Men's Department has a purple one too. The wild Goblin King-like style hair by La La Moon. Jewelry is by Chaos Panic and Disorder at World Goth Fair, and these cool spooky eyes by Stringer Mausoleum. The skin is from the demon series by Tableau Vivant. The boots are rigged mesh by Jilroxy. Another fantastic pose by the F*cking Ninjas. (I hope there are more multi-poses in the future!) On the other side of the image I get to show you more items from the World Goth Fair thanks to the magic of post-editing. Tricky! lol The jacket is at WGF from Dark Water Designs. Jewelry by Chaos, Panic, and Disorder. The pants are a fantastic deep red color that I love. Yes! These came in handy! Laced up boots by Lassitude & Ennui. The shoulder length long layers hair by Dura looks cool from the back too. In the middle, Fulli is wearing the Project Alice hair Ivy which is an exclusive at the WGF. This outfit by Sakide looks very cool! Perfect club wear for aspiring succubus. lol. Little Bat Sally Skin is in the gacha at the fair. Horns by Half-Deer. Cyber boots by A&Y. This beautiful and rich red furniture from Senzafine I love! And it works great with the Urban Gothic cityscape by The Nawty Box. Infact, I will be living here for awhile. *loves*  ......Wheow.... Done!  I hope you all enjoyed my coverage of the World Goth Fair, showing you things for the guys, some for the girls, and wrapping it all up in a storyline. The story is fanciful, but also has message that relates the goal of S.O.P.H.I.E. (stamp out prejudice, hatred, and intolerance everywhere.) Until next year! This happy bat signing off.

On Him left, Deathhead Scout Wrath:

On Him right, Noble Elder Maximilian: 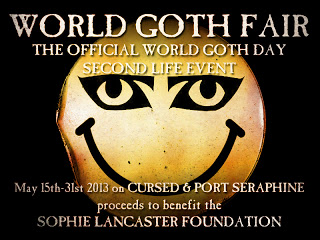